General Law Enforcement discussion which does not fit into other channels. Post your thoughts and feelings about anything you want (LE related), or just vent those fumes about whatever is on your chest.
Locked
241 posts

I did a search and read some of the long winded opinions and views on this company, but noticed that alot of the posts were quite dated. I just recently noticed that they are hiring for several positions and was curious if you guys here could give me a little bit of current insight into them for those of you that currently work for them or have worked for them recently.

I'm basically looking for some "related" experience to bolster my resume a bit, and I realize that there are several different way to go about this, but I'm considering this as an option. How is their pay? Do you have to buy your own equipment (cuffs, baton, vest, uniform, etc.)? Do you get paid during training? and is a job offered to you BEFORE the training? or is only after the training is complete? Does something like this really look all that good to Police Services as a springboard to them?

I guess that's about it. I put this in the rant section, since I'm looking for some honest opinions here as to what the comapny is like and to whether or not I am wasting my time considering this.

If I was you, I'd stay away from Intelligarde. I dont know who is writing their job adds these days, but they are hillarioius (see workopolis).

example:
"This is the big trampoline into Federal, Provincial, Regional and Municipal police services. Intelligarde has sent hundreds of men and women onto Emergency services, Correctional service and Police. Intelligarde is as close as you can get to being â€œ on the jobâ€. Conduct field investigations, work on community crime issues, back-up fellow officers and if push comes to shove make an arrest. Hereâ€™s a selected list of Jobs available:"

Currently working for them.

The pay is on the same level as other contract security companies in the GTA. This is not really a job you do for the pay, but one you do for the experience.

Yes, you have to buy most of your own equipment. For the uniform, some of it is bought, some just borrowed. After your 3 months probation you can choose to get your equipment through the company and they'll deduct from your paycheque as time goes on.

Yes, you get paid for training. Only for PET (Pre-Employment Training) though. Not for any of the other courses.

The job is not offered to you until you're finished the training and have passed all the tests.

I have heard some good things as to how police services recognize this company. I heard from one applicant that got deferred with Peel Regional Police that the recruiter specifically named this company as one to go to and get some relevant experience when he asked for advice. The experience you gain is really valuable. Another company that provides a similar experience except with what I've heard is better pay, is Delta Security.

I think one of the biggest things for you to consider is whether you're comfortable working at the high-risk sites that we have (many of them are quite high-risk). Keeping in mind you're dealing with a lot of crap without a firearm, pepper spray or even the legal powers that the TCHC specials have. If this is something you're ok with, it is a decent company to work for.

Ducky76 wrote:example:
"This is the big trampoline into Federal, Provincial, Regional and Municipal police services. Intelligarde has sent hundreds of men and women onto Emergency services, Correctional service and Police. Intelligarde is as close as you can get to being â€œ on the jobâ€. Conduct field investigations, work on community crime issues, back-up fellow officers and if push comes to shove make an arrest. Hereâ€™s a selected list of Jobs available:"

Hey don't be slaggin' Intelligarde! I "worked" there for two weeks (I got screwed around after 2 weeks of un-paid training before being told they would call me when a position became open... and after I had quit my previous job to go here.... ARGH!), and now I am a highly successful Federal Agent.... Thank you Intelligarde for trampolining me into my chosen career!

(COKE's Note: My experience was in 1992, so things could of changed since my time behind the wheel of GARDE1!)

I worked for them for about one year from mid 2000 - mid 2001... I started part time, then went full time... Always working in the Mobile Division... I did not really have any complaints, except for one particular "Problem Resolution Officer" (PRO), she was a tad

to say the least.

I took the self defense / baton training, Standard First Aid, and Mississauga Parking Enforcement courses... I did not have to pay for the courses, but I don't recall if I was paid while I took the courses.

Again, no complaints here, I see Eric & Jan from time to time (at the Leslie Street Wendy's).

Oh, while I was working there a few of the guys moved on to different Police Services.
LIVE IN THE PEEL REGION AREA?
VOLUNTEERS WANTED!
>>> RSAR.CA <<<

Thank you very much for the information. I really appreciate it.

I don't think I have a problem with the high-risk sites and I understand the job description.

Thanks for you reply. 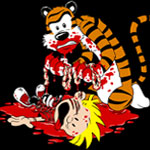 Go to their three or four day orientation BEFORE leaving your current employement. I found it to be a joke and did not return after the first day. It certainly didn't help when the 'instructor' informed us of his pending criminal charge for impaired driving. If you're heart's set on security in the GTA look into internal security services in the area. Stay away from contract.

On another note, Intelligarde's office was dirty, unprofessional and, quite frankly, smelled like my toilet after hot wing night. I would stongly advise against the 'fast track into policing'.

Delta Security is no better.
va

It certainly didn't help when the 'instructor' informed us of his pending criminal charge for impaired driving.

Oh yeah, back when I went for a job interview (1997 or something), the guy who interviewed me from HR was carring a gun.

dresspants, dress shirt, tie and a gun holster!
what can I say lol

You're started with a basic english skills (comprehension, definitions, writing) test. One of them is a set of unsorted occurrences and you need to organize them in a coherent and chronological order. Then throughout the week you study and are tested on ethics, trespass to property, powers of arrest, report writing and a few other things. During this time you're also assessed on your behaviour, being able to work well among others in the class. Altogether, it's not really hard. It'd be tough not to pass this stuff. They do watch you the whole time, it's not just learning the material, it's kind of like a week long job interview. For instance, one person was dropped from the class because he was seen harassing one of the females in the class.

Most are at specific dates. The only ones that are at your convenience are take-home booklets.

I've never seen a single staff member carrying a gun in the office. If they used to do it, I'm pretty sure those days are long gone. The two main instructors we have are quite good at what they do. One of them is a former corrections officer and the other one is a retired TPS Sergeant. The latter is also a Jin-Jitsu instructor, so he's good at teaching the self-defence classes, as brief as they may be.

My thoughts exactly.....why the hell would these guys need to carry a gun in the office? As soon as they leave the office, the gun must come off. Idiots!!!

Why don't you apply for a job at a group home for kids?....or apply for a L/E job like corrections....something meaningful. Why does everyone think working as a security guard will get them on the job? Is it because they drive around in police wannabe cars and wear police like wannabe uniforms? Forget security and get into something where you are actually helping people. Corrections are always looking for people, pay and training is good and most important, you deal with the people you will be arresting on the street. You will use "use of force",Tac comm etc, you will learn about court dispositions etc....

FORGET SECURITY....there are so many other jobs out there like group homes, halfway houses etc...that nobody wants to work at.