dwest wrote:I was told by my detachments aux coordinator that A/Cst got to regina for 10 days get O.C sprayed and come back wearing kit. This was approx 4 months ago. Perhaps its different now?

Since you are in F Div, that makes sense. Now tell some Aux applicant that is going to volunteer say from BC or NB that they are getting a no expenses paid trip to the city whose name rhymes with fun and see what the reaction is. Not every Aux is trained/briefed in Depot.
Patch Trader? Go to My Patch Page

They aren't sent to Depot from D Division either.
Opinions posted are my own sole opinion not reflective of any views/thoughts of agency. Answers may or may not be truthful, As if you couldn't tell.

I see, that does make a lot more sense now!!! Thank you for clearing that up!

I was under the impression that all A/Cst went to depot!
A lot can be said about how a person deals with an offence. Kicking a person when they are down doesn't make you look any better!

Everybody involved in this discussion seems to have ignored the fact that some citizens/civilians are drawn to Auxiliary policing for other reasons besides the vaunted and ballyhooed ride-alongs with regular members.
Some of these "other reasons" include programs like the following:
Block Watch, DARE, CPTED (sp?), SAFE schools, Child Identification programs, victim services, fraud education, crime free multi-housing, speed watch, etc. etc. etc. (Anybody care to add to the list?)
Auxiliaries should to be knowledgeable about all of these programs. They should also be keen to participate in them! Sadly, it seems most Blue Stripes* are simply Yellow Stripe wanna-bees.
Some Auxiliaries get involved in Auxiliary policing primarily in order to augment the efforts of those civilians - community leaders - who operate and co-ordinate the various community programs.
The appeal for some Auxiliaries does not include riding along with regular members - that's a secondary responsibility, but not a "perk" at all. Remember that some of the so-called perks of ride alongs include: getting spat on by druggies, sitting in a patrol car until your bladder bursts, traffic control in the rain and snow, writing up traffic accident details, attending court, paranoia about being executed while sitting in a doughnut shop, breaking up fights between abusive drunks, physical injury resulting in lack of income due to missed work days, etc (anybody care to add to the list?)
Those Auxiliaries who vigorously defend their status as a "Peace Officer" just because they've been exposed to some of the same training and experience as regular members, need to remember their role in community policing and be worthy of the Blue Stripe**.
Disclaimer: I'm not a RM, I'm an Aux trainee who has no interest in becoming a RM.

I am an Auxiliary. My job is the following:

2) Be here when the S*&@ hits the fan during a state of emergency (because we all know the RCMP cant handle it...not the RM's fault, they are great, its just the fact that theyre arent enough of them)

After all, we have a mandate. I have a lot to offer as an RM. I have no problems with getting through the process at all. Why havent I? Don't want to.

Some of us want to be Auxiliaries. I am proud of what I do. I don't need a yellow stripe, and, quite frankly, I dont want one. If and when I do want a yellow stripe, I will earn it.
Break the arm of the wicked and evil man; call him to account for his wickedness that would not be found out. Psalm 10:15

Hahaha
Opinions posted are my own sole opinion not reflective of any views/thoughts of agency. Answers may or may not be truthful, As if you couldn't tell.

Pete Broccolo wrote:A/Cst going out with TS will now be a thing of the past, as it MAY be for the GD types.

Pete, are you saying the RCMP may stop A/Csts from going out on GD?

Certainly from the way "F" Div TS is interpreting the policy, A/Cst will no longer be going out with us; I am not so sure about how GD Units will be interpreting it. I would almost rather see A/Cst out with GD anyway, given their lack of numbers. Given that my Cpl and I double-up, and if we EVER get our 3rd Cst position filled then that person and my other partner (or whatever other combination of the 4 of us with 2 cars becomes) will double-up, so having an A/Cst as shotgun is kind of moot for us anyways. Before you ask, no, my other partner is not really able to take an A/Cst out with him, as he works either 07:00 - 17:00 or 12:00 - 22:00, so same is not A/Cst-with-a-real-job-friendly, even before factoring in the policy interpretation.

I can see the Force saying, "Okey, dokey, let's designate local persons fluent in the majority language which the R/M are NOT fluent in as A/Cst to help with the communication barrier, or some other non-operational / front-line work, but we will actively seek those who have pulled the pin but still willing to heed the call of doing whatever wherever whenever for a pension-supplementing cheque as a R/Cst." Certainly in "F" Div HQ there are a LOT of Temporary Civilian Employees with HRMIS #'s that are suspiciously low and are known to have a dusty, closet-shrunk, Red Scourge hiding at home, while some with low HRMIS' have already been re-gatted and kitted out as R/Csts, thus becoming my newest heroes (despite my knowing their past indiscretions!!). Therefore, I am supportive of the R/Cst program, especially since I want to be one of them!!

maybe most, but not all.
Break the arm of the wicked and evil man; call him to account for his wickedness that would not be found out. Psalm 10:15 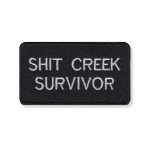 There is no blue stripe on the RCMP uniform pants. The hat is all now the same colour, no additional stripe.
A Veteran = Someone whether active, retired, or reserve who has in his/her past written a cheque made payable to "The People of Canada" for the sum of "Up To & Including My Life".
Post Reply
77 posts